Sondra Garcia, a guidance counselor at New Britain High School, visits the exhibit and suggests a movie be made about the Borinqueneers, adding that it should have a Hispanic cast.

Bill Sarno
CTLatinoNews.com
A new boost in the on going campaign to honor the 65th Regiment of Puerto Rico, the Borinqueneers from the faculty and students at Central Connecticut State University is in the form of a photograph exhibit titled, ‘The Borinqueneers: Triumph Through Adversity.’
The exhibit is on display at the gallery in New Britain Visitors Center on Main Street now through April and organizers hope it helps keep interest in the plans for a  monument and memorial park in New Britain dedicated to the last segregated unit in the U.S. military.
The exhibit utilizes a half-dozen student produced panels that chronicle the contribution during three 20th century wars of the Borinqueers, the nickname members of the 65th Army regiment gave themselves  in spite of the discrimination they endured because of their heritage.  The display includes separate text and photo presentations which spotlights four Borinqueneers who currently live in Connecticut and focuses on Korea, the last war in which the  segregated unit was engaged in a battle
Two Central Connecticut State University professors, Leah Glaser and Heather Rodriguez, initiated this exhibit within the context of a larger Latino studies endeavor. They see this class project as a way to rally support for the local Borinqueneers memorial and to draw attention to a central element in their grant-funded project, the screening of the six-part PBS documentary series: Latin Americans: 500 Years of History.
Moreover, Glaser said, fostering a relationship with the local Latino community is good for her public history program and for the

New Britain university’s Latino studies classes.
A community reception for the exhibit’s opening was held recently,  although  the display had been present since mid-December, which featured ethnic dishes fancy cupcakes and free t-shirts. It offered an additional way to “spread the word” about the monument campaign and the campus program, Rodriguez said.
Several dozen people — politicians, college faculty, local educators, community leaders and the curious — sloshed through ice and snow to view the exhibit and to get an update on the progress of memorial park effort. Glaser and Rodriguez were pleased by the turnout and interest in the 65th Regiment even though attendance might have been diminished by a snowstorm earlier in the day that had shut down the university and made the going treacherous for older invitees.

Two New Britain political leaders who attended the reception, State Rep. Robert Sanchez and Alderman Christian Rosado, both expressed confidence that the effort to  obtain funding and government support for a monument to salute the Borinqueneers would be successful. “We are going to get it done,” said Sanchez , al Democrat.
Rosado cited the growing influence on the city’s Common Council of Latinos and the support of other leaders for the memorial park. “We will work together collectively to make progress on this endeavor,” the Republican officeholder said.
The city already has designated an area near Washington and Beaver streets for the 65th Regiment Memorial Park. A groundbreaking and flower planting ceremony took place at the site in 2014 and a sign indicating the site as the future location of the memorial park is in place.
There has been one change since the project began, says Carmelo Rodriguez, chairman of the New Britain Latino Coalition, explaining that the local 65th Regiment memorial group is now part of the broader coalition as a subcommittee.
Sanchez said he is working with the state Bonding Commission to acquire to acquire the funds for the Borinqueneer project, which he estimated will cost “$300,000 to $350,000 or even more.” He also is looking for an agency to accept the funding and he hopes this can be arranged with the city, likely through the public works department.
Sanchez said Mayor Erin Stewart is “100 percent” committed to the project, as is Gov. Dannel Malloy.  The legislator added that even in tough budget times money is usually  found for veterans-related items.
Glaser, who teaches public history and is a member of the CCSU Latino and Puerto Rican Studies Committee, explained the exhibit was the outgrowth of a $10,000 grant she and Rodriguez, an assistant professor of sociology, received to jump start their Latino studies project.
In addition, Glaser noted that Sanchez held a meeting with the CCSU history department to discuss ways the campus might support the idea of the Borinqueneers Memorial in New Britain.
“Doing something about the Borinqueneers seemed logical,” said Glaser.   About 20 students researched the 65th Regiment using online resources and taped interviews that were part of the college’s Veterans History Project. Then they were divided into smaller teams with each group assigned one of the panels.
The display was set up in a hectic two-hour block set up Dec. 17 for the final exam, Glaser said, and has been visible for several weeks. Funding left over from the grant enabled the professors to set up the reception.
The four Borinqueneers spotlighted are Luis R. Centano, Celestino Cordova, Dolores Nieves Hernandez and Luis Ruben Rodriguez.
Glaser and Rodriguez had hoped that the four veterans, who come from various towns in Connecticut, would attend the reception, but one was ill and the day’s snow storm was an apparent deterrent. “I hope they will get to see the display,” Glaser said.
With the surviving Borinqueneers mostly in the 80s and older, Sanchez said there is a need to get this project moving quickly. The legislator said he gets a call every month from a Borinqueneer in Hartford who asks “when is it going to be done?”
Several attendees at the reception had heard of the Borinqueneers, but appreciated an opportunity to learn more about the Puerto Rican regiment. Sondra Garcia, a guidance counselor at New Britain High School, suggested it would be nice to have a movie made about the Borinqueneers. Of course, she added the movie should have a Hispanic cast, possibly including the distinguished Mexican-American actor, Edward James Olmos. Some Puerto Ricans? How about Benicio del Toro, Luis Guzman and John Leguizamo for starters.
The next part of the free CCSU Latino series is scheduled for Thursday Feb. 11 at the Torp Theatre in Davidson Hall on the New Britain campus. A 5:30 reception will precede the 6 p.m. showing “The New Latinos (Episode 4).” After the hour-long video, there will be a discussion lead by Mark Overmyer Velasquez, a University of Connecticut professor who is director of the Institute of Latina/o, Caribbeandel  and Latin American Studies (El Institute). 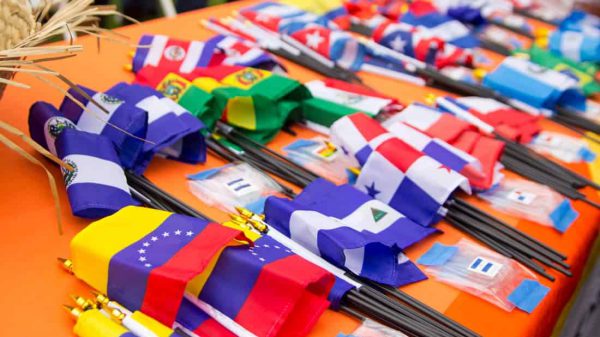