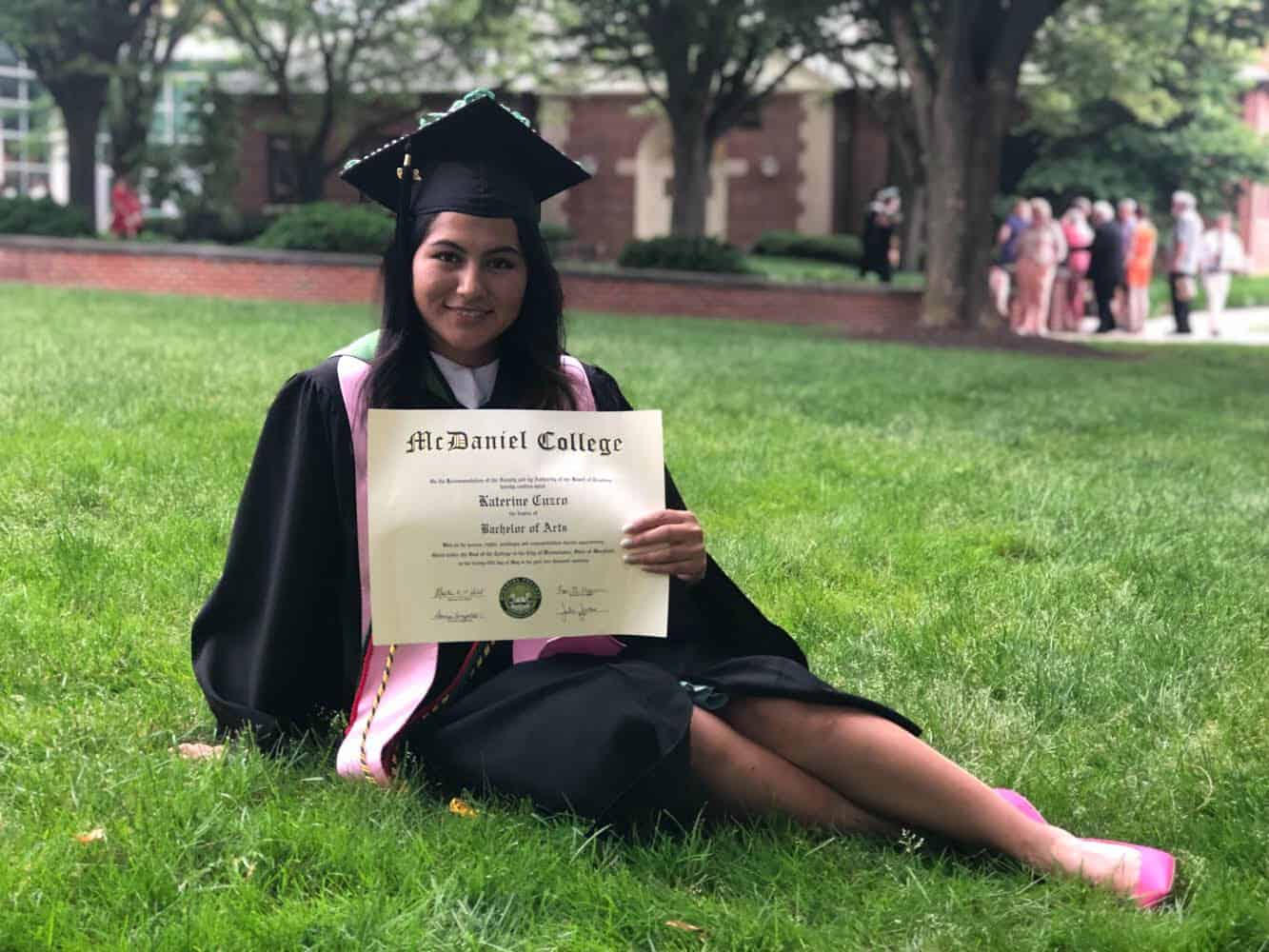 Katerine Cuzco always wanted to attend college to study biology, but when she moved from Cuenca, Ecuador to New London, Connecticut at the age of 15 she found herself wondering if she would ever have a chance to fulfill this dream.

Like many Hispanics, no one else in her family had attended college in the United States and the process of admission and financing higher education seemed a mystery to Katherine and her mother.

“I had no idea what to do,” Katerine recalled of where she stood during her junior year at the Science & Technology Magnet High School of Southeastern Connecticut in New London. “I probably would have gone to a community college,” she said.

Her prospects changed when her mother visited a church on Redden Avenue in New London and saw the office of Higher Edge, a New London nonprofit organization founded in 2011 by Chris Soto, a graduate of the nearby U.S. Coast Guard Academy.

Higher Edge, which is entirely funded by grants and donations, offers free assistance to high school students of all races, as well as those from the first generation of their families to attend college. The goal is to help these young people develop the skills and acquire the resources they need to not only navigate through the college admissions process but also to graduate.

Last year, Soto, who was elected to the state House of Representatives in 2016 and 18, and now is fully engaged as legislative director for Governor Ned Lamont, turned over Higher Edge to a five-person professional staff and a board of directors that includes education and private sector leaders from throughout Southeastern Connecticut.

By the end of her junior year, Cuzco joined Higher Edge which through its College Access Program walked her through the process of selecting a college and applying for admission, scholarships and financial aid.

In helping students pick a suitable college, “everything is viewed through the lens of affordability,” said Theresa Armendarez, Higher Edge’s executive director.

One-on-one counseling takes place 14 times during the school year, but Cuzco often spent as many as three days a week at the New London office. “It was my second home, she said.

Cuzco’s decided to attend McDaniel College in Maryland, a private school whose total cost now tops $54,000 a year but also is generous with financial support.

However, as a freshman, Cuzco had doubts about this decision. Not only was there stress from living “far from home,” but there were financial issues. Her freshman year’s cost had been completely covered by eight scholarships, but the future looked uncertain and she contemplated transferring to less expensive and closer to home Eastern Connecticut State University in Willimantic.

“I did not have anyone at home who knew what to do,” Cuzco said.

Cuzco’s dilemma mirrors that of Hispanics in general. In 2012, 69 percent of Hispanic high school graduates went onto college, many to community colleges, a rate that was higher than that for Whites and African-Americans, However, only 16 percent of Hispanics have earned a degree by their late 20s as compared to 40 percent of whites, according to the Pew Research Center.

However, with Higher Edge’s help Cuzco would go from a student who might not survive to someone who thrived at McDaniel College. In May she graduated from the four-year liberal arts school with a bachelor’s degree in both biology and environmental science. While set up with internships through next May and is considering pursuing a master’s degree.

“Without High Edge, I would not be here,” the college graduate said.

Cuzco benefitted from High Edge’s Success program which closely follows how its students fare at college, especially during their first year. As a result, 86 percent of its students make it to their second year.

During the freshman year, the program’s advisors visit students at Connecticut colleges, but in the case of students like Cuzco who go out of state, there are regular texts, emails, phone calls, and chats on FaceTime.

“We take a holistic approach to helping our college students,” said Armendarez, who said this was expressed through SAFE, an acronym for the organization’s “Student Academic, Financial, Emotional model

When a college student is thinking of dropping out, Armendarez said, “we try to walk that person through their issues” and if need be Higher Edge will refer the student to someone on campus who is familiar with Higher Edge.

In Cuzco’s case what made a big difference was obtaining a residence assistance position, she said, and Higher Edge continued monitoring of her dorm situation, job, and academic progress through the remainder of her four years at McDaniel.

“It really helped to know that I had someone who knows what to do next,” Cuzco said. And this included calls from her advisor and arrival of packages of supplies and snacks before potential stress times like exams.

“We are trying to change the thought that college is a dream to that it is a given for which these students have the talent and ability to succeed.”

Cuzco is just one of the scores of Hispanics and other minority students, that Higher Edge has helped access and remain in college fulfilling Soto’s vision expressed in a 2015 interview: “We are trying to change the thought that college is a dream to that it is a given for which these students have the talent and ability to succeed.”

The program started its first year with six students, but over the last eight years, its growth and diversification have been striking, not only in numbers but also with the opening in 2015 of a second office serving the Windham/Willimantic area.

By 2015, Higher Edge was working with 31 students, mostly Hispanic females, and had seen 98 percent of its graduates go on to college with a total of 60 students, mostly Latinos enrolled. Last year, Higher Edge had 175 students in college, 46 of whom were listed as Hispanic, Armendarez said

This September, this college enrollment will grow to 188 and there will be 72 students in the College Access Program. Forty will attend the New London center which is still in the church on Redden Avenue. This office works primarily with New London High School and Science & Technology Magnet High School.

Nearly as many will use the Willimantic office, which is located in the Interfaith Cultural Center on the campus of Eastern Connecticut University and is staffed by CAP counselor Jason Pellum.  This site works with students from Windham and E.O. Smith high schools and Windham Tech.

Most of Higher Edge graduates attend in-state four-year colleges such as Eastern Connecticut and the University of Connecticut at Storrs and Avery Point with about 30 percent going out of state to schools in Massachusetts, Pennsylvania, Georgia, Maryland, Indiana and elsewhere, according to High Edge.

There also are more than a dozen students at Three Rivers Community College in Norwich but several of those will transfer to four-year institutions, said Mauro Diaz-Hernandez, Success Program Manager.

The program has developed a good relationship with UConn, Eastern, and other local colleges, Armandarez said and works with high school counselors to identify students who might fit academically and need into the program.

As of mid-summer, 48 students from Higher Edge were signed up for college in the fall, but this number was expected to increase as more people finalized their decisions, Mauro said. Before these students leave for school, Higher Edge will set up an appointment for their first contact from Success counselors and will hold a send-off barbecue.

Nationally, about 59 percent of all students entering college graduate in six years, but Higher Edge projects that its mark is about 70 percent, with most participants graduating within four years, Armenderez said