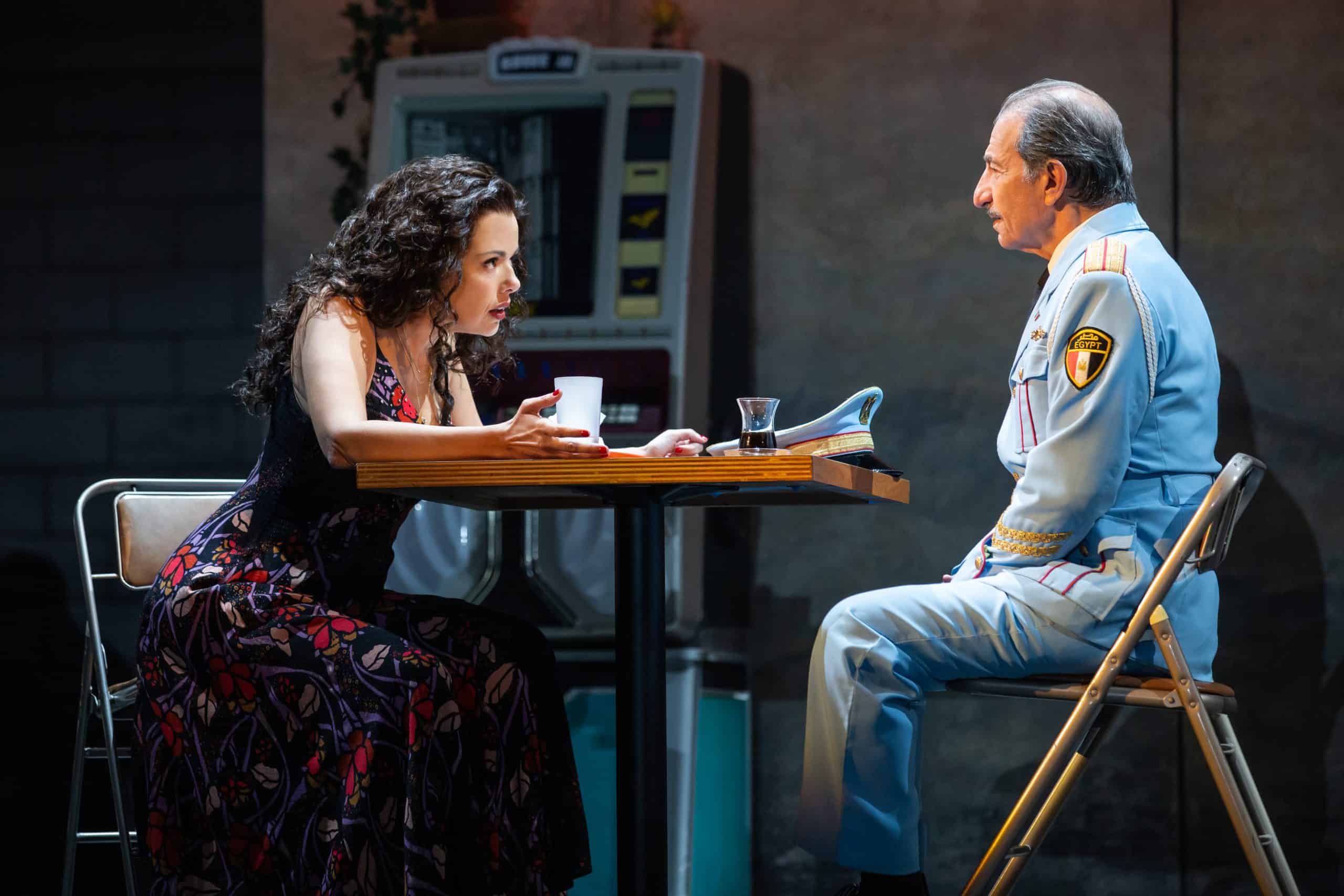 “Life in the theater is not for the faint of heart.” Janet Dacal

In 2016, when Goodspeed Musicals sponsored a gala in honor of the extraordinary actress Chita Rivera, I had the opportunity to meet Janet Dacal, who was one of the lead actors in the musical “Bye Bye Birdie” being produced at Goodspeed.

As luck would have it, Janet and I sat next to each other. Right away we started shifting between English to Spanish. She asked, “Are you Cuban?” My accent gave me away. A few minutes later she was inviting me to join her when she cooked “arroz con pollo” for the cast of “Birdie.” Getting the cast together on their day off, and cooking for them is something she finds relaxing and very enjoyable.

At the gala, the moment when Janet was scheduled to go on stage the laid-back and friendly actress transformed into  Rosie. She was to perform “Spanish Rose,” a sultry musical number from “Birdie” made famous by Chita Rivera, in the original Broadway production, and who was sitting right in front of the stage.

Since making her Broadway debut in 2004 in “Good Vibrations,” Janet’s career has kept her very busy. She has recorded a song featured in the movie “Exposed” starring Keanu Reaves; played Carla, in the original cast of Lyn-Manuel Miranda’s “In the Heights,” for which she received the Drama Desk Award in 2007, and was also in the TV series “White Collar.”  She has also performed in “Wonderland,” (2011),  Bye Bye Birdie (2016) “Prince of Broadway” (2017-2020), and “Viva Broadway. Hear Our Voices.” celebrating Latino heritage.

Janet released  “My Standards” a CD produced by Ghostlight Records in 2019. The CD includes the bolero “Sabor a mi,” and tunes “Tenderly” and “Fever.” She also has “Luna Cuna” a lovely CD of Cuban lullabies her mother and grandmother would sing to her.

She wanted to preserve them in a new realm.  The production of the album emphasizes a more contemporary sound while keeping the integrity of its original flavor. Making this recording was also very important to her because “There are no collections featuring lullabies from different countries and arranged in different musical styles and translated,” she said.

She frequently mentions her family which has always provided one of the most important connections and supports in her life.

In a 2016 interview, I asked her “Where are your parents from? Did they speak Spanish at home? “She replied “They are Cubans and it was very important for them that we learn not just the language but also the culture. We had dinner together every night and spoke only Spanish. I have two brothers and if we spoke English, my father would command “Español!” I’m eternally grateful he did this.

It’s easy to see why Janet has always been so involved with music and the arts. As a child, her home was filled with many different kinds of music. “In my early childhood, I would dance around with a spiral brush as a make-shift microphone.  Mami quickly recognized my interest and registered me at the local dance studio.  That was it. ”

Asked if she remembered her first play, of course, she does. “Oh gosh, first show was Snow White and the 7 Dwarfs,” she said. She played Snow White and still remembers that audition.  “My elementary school teacher in charge of the drama department, Mr. Pedraja, handed me the audition lines and in the scene description it read “sob”.  I wasn’t familiar with the term “sob”, so when I went up to audition he says, “Sob, SOB”…I looked at him with a blank stare.  “CRY!” he emphasized.  It didn’t take much, tears welled up and I got the part. “

During a radio interview with Joseph Plant, for his podcast “Plant on the line” from Vancouver, BC. Janet was asked about life during the quarantine. Her answer really illuminates the reality of the lives of actors all over the world. She said that “actors are prepared for shutdowns always” because their careers are “stop and go.” Downtime is part of their lives. The difference this time was that there was no sense of when “go” would happen.

In January 2020, Janet was to join the national tour of “The Band’s Visit.” An extraordinary opportunity to showcase her talents in the leading role of Dina. The play is based on the 2007 award-winning Israeli film of the same name and opened on Broadway in 2017. The musical adaptation is by David Yazbek and Itamar Moses.

The Band’s Visit has received critical acclaim for Broadway and off-Broadway productions. Among major awards are the 2017 Obie Award for Musical Theatre, the New York Drama Critics’ Circle Award for Best Musical, and at the 72nd Annual Tony Awards it was nominated for an impressive 11 awards and won 10, including Best Musical. The Band’s Visit is one of the most awarded and celebrated musicals in the history of Broadway.

It also received the 2019 Grammy Award for Best Musical Album.

The play takes place in 1996, in Negev, a large desert region in Southern Israel. An Egyptian Ceremonial Police Orchestra arrives in Israel, and when there’s no one to receive them at the bus station, their leader decides to take the group to their destination. But when they buy a ticket they got the name wrong and ended up in the isolated town of Bet Hatikva instead of Petah Tikvah where they were supposed to perform. Janet plays Dina, who will very generously provide shelter for these out-of-towners as well as friendship.

To prepare for the role of Dina, she was coached in an “Israeli accent.” She confesses that she walked to different places speaking with that accent, to practice and test herself.

When we consider the subject matter of The Band’s Visit, in the context of the long-standing adversarial positions taken between Israel and most Arab countries, this play is a remarkable achievement. A call for unity and recognition of both people’s common humanity. A special moment to learn about each other as Dina and Tewfiq, the Orchestra’s leader exchange stories about their families.

Sadly, and with everything ready to start, the National Tour of “The Band’s Visit” was canceled due to COVID-19. It has taken over a year for those actors and musicians to get back together to, once again, delight audiences with this extraordinary play.

BR: How do you prepare for such a long tour (26-city) and interrupted tour?

JD: You take it one city at a time! I’m so grateful to be sharing this story all over the country; it’s a true blessing to be doing what I love after being away for the last 18 months. Since this is my second attempt at this tour, I learned to pack lightly and only carry the essentials. It’s easy to want to bring all of your favorite things with you, but it’s not easy to pack and unpack them from city to city.

BR: You got engaged before Covid-19, have you been able to marry yet?

JD: We’re planning to have all of our family and friends get together when it’s safe to have a live salsa band, so everyone can dance and celebrate…but only when it’s absolutely safe.

Because she had told me when we first met that she liked to cook for the cast, I wanted to know if she was still doing this while touring. “It’s a lot more challenging to cook for a large group while on the road, but we do have a couple of city’s where we’ll sit down for a few weeks and I hope to feed them and make their bellies happy at some point.”

As for what this play and touring has meant to her, she wrote back “Again, I’m so grateful and feel so blessed to be doing what I love, especially with this beautiful show. I encourage everyone to come see The Band’s Visit, it’s a timely show with one of its messages being about human connection…something we’ve really needed and are slowly being able to share.”

The Band’s Visit will be presented at the Bushnell Center for the Performing Arts, 166 Capitol Ave. Hartford, from November 16 to 21. For ticket information call 860-987-5900 or visit their website: www.bushnell.org

Bessy Reyna is a member of the Connecticut Critics’ Circle.