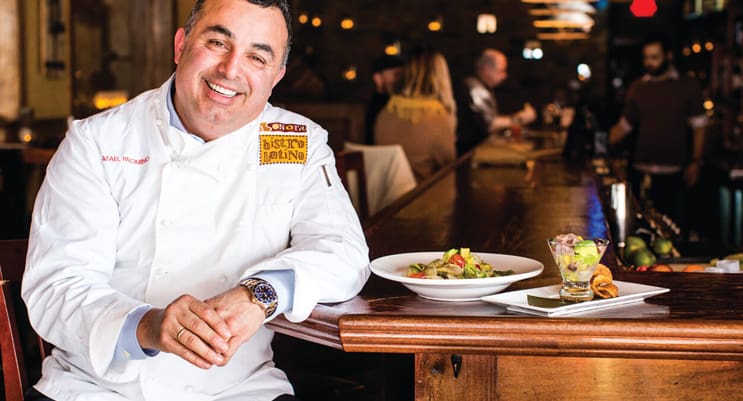 “Skirt steak with lobster fried rice. A quail egg on top with a saffron mojito sauce. The steak marinated until it’s like

butter.” As Rafael Palomino describes one of his favorite dishes he has created, my mouth waters, and suddenly I really want a skirt steak with lobster fried rice, a quail egg on top and saffron mojito sauce.

As a talented chef, this is his gift: tantalizing taste buds and whetting palettes. Palomino sells thousands of pounds of skirt steak a year with the dish described above … and that’s just one dish. Palomino spreads the love throughout eight different locations, five cookbooks and NYKitchen.com—a new delivery concept in New York City. Palomino says the end goal is simply to make people happy.

“I love what I do,” says Palomino. “It doesn’t feel like I’m working. I’m creating and making people happy. And that’s huge. I enjoy it very much.”

Palomino first stepped inside a kitchen at 17 years old, as a garde mange (salad station) at the Verve Cafe in Brooklyn Heights. “I loved it ever since,” he says.

Palomino’s cooking has been widely influenced from his childhood in Bogotá, Colombia and his later travels around the world. His restaurant introduction in New York brought him the realization of his passion, and later his travels to Spain and France allowed him to work alongside culinary legends like Larry Forgione, Charlie Palmer and Michel Guèrard.

While he currently lives in New York, he has an established restaurant in New haven, Connecticut called Pacifico, which he opened 16 years ago after falling in love with the location.

“I drove by myself to Connecticut on a rainy Monday to go see the restaurant,” recalls Palomino. “I saw it and I loved it and I told my partners, ‘We are taking this place,’ and we took it. And it’s been open ever since.”

The concept behind Pacifico came easy enough. “Having worked in Spain and France I understood the concept of tapas very well,” says Palomino. Pacifico is an enhanced version of a previous restaurant he had and he wanted it to be about seafood, tapas and fun.

As for inspiration Palomino says it’s like fashion. “When I take the kids out they will say they like something and I’ll buy it and try it out,” explains Palomino. “Like vegan, people like vegan so I came out with a vegan main course.”

Fun seems to be a cornerstone in Palomino’s restaurant philosophy. Sharing a bit of insight to his success, Palomino says, “There are three ingredients for the restaurant business:

Palomino continues to push his creativity to new levels, always looking for new business opportunities and unique ways to bring his creations to people. He says he is currently working on menu items that incorporate things like butternut squash and other items that go with the season. “No matter what it is, we are going to make it fun,” says Palomino. “Creating is my favorite aspect of the restaurant industry; making people happy.”

In this article:chef, Rafael Palomino