Special to CTLatinoNews.com                                                                                                                                                                 Karen Cortés
Truth be told, I’m not a sports fan. My excursion to Thursday’s Yard Goats v. Rumble Ponies game at Dunkin Donuts Park in Hartford was to be an extension of happy hour downtown. What I found was a park where seasoned fans and (ahem) less-knowledgeable patrons could cheer for players on the cusp of the majors, stroll the food concourse, or both.
After a year-long delay in opening the park, it was recently named the winner in the third-annual Best of the Ballparks fan vote from Ballpark Digest. “The fans know baseball. They’ve provided our players with a major league atmosphere,” says Jeff Dooley, the Yard Goat’s director of broadcasting and media relations.
Fan or not, with a 7:05 p.m. start, there is ample opportunity between work and game time to pre-game at Hartford bars and restaurants. Our foursome started the evening with happy hour at Dish on Main Street, then took the quick walk to the park, which links the city’s Downtown and Northend neighborhoods.
I recognized several other Dish patrons who had taken the same bar-to-game route. In no time, we were settled into our seats for the game with popcorn, beer and wine in hand. Yes. Wine at the ballpark. At Dunkin Donuts Park, it’s Portuguese Votto Vines VINǎǎGO. Best chardonnay ever? Probably not, but the handy single serve container was ice-cold and fit nicely in the cup holder.
Play ball!
The Rumble Ponies had a five-run third inning while the Yard Goats were scoreless until the bottom of the fifth when catcher Jan Vázquez hit a right field upper deck homer. The 26-year-old from San Lorenzo attended the Puerto Rico Baseball Academy in Gurabo and was selected in 2009 by the Los Angeles Dodgers in the sixth round of the First-Year Player Draft. Vázquez has played for minor league teams in Arizona, Utah, Tennessee, and in New Britain for the Rock Cats.
Six Yard Goats players were called to the majors last season. “It’s fun to see the guys go up the ladder. At the Double-a level, they are really close,” says Dooley.
Neighborhood Flavor
After the fifth, it was time to find Neighborhood Flavor, a dedicated space on the third base side of the concourse for Hartford restaurants. On Thursday, Park Street staple Comerio was serving pinchos, Cuban sandwiches, and tripletas—a combination plate of pork, shaved steak, and chicken.
Luis Rodriguez, a 1993 graduate of Bulkeley High School, has owned Comerio for 20 of the restaurant’s 50 years in Hartford. “Serving at the park has given us the opportunity to share the flavor of Puerto Rico with people who otherwise wouldn’t be exposed to it,” he says. Rodriguez and his staff were there for the Yard Goat’s home opener in April, and will be on hand for another four games throughout the season.
Comerio will alternate Neighborhood Flavor dates with Quick Bites food truck, serving Jamaican food, and The Rockin Chicken, a Peruvian restaurant on Franklin Avenue. (Quick Bites: July 13, 28, and August 13, 31; The Rockin Chicken: July 17 and August 8, 22; Comerio: July 14, 29 and August 18, 30).
The Takeaway
The Yard Goats and Dunkin Donuts Park are a welcome addition to the downtown Hartford entertainment scene. Ticket prices start at just $6, so a game can be an affordable family night out. It will take multiple visits to eat your way through the park.
Make a night of it by visiting one of the many restaurants within easy walking distance before the game. Seats at the Thursday 6/29 game were about 70% full. So far this season, the Yard Goats have sold out 15 games, including dates leading to July 4 weekend. Tickets and other information are available at YardGoatsBaseball.com
Drive safely, and enjoy the game.
(Spoiler alert: The Rumble Ponies won 7-5.) 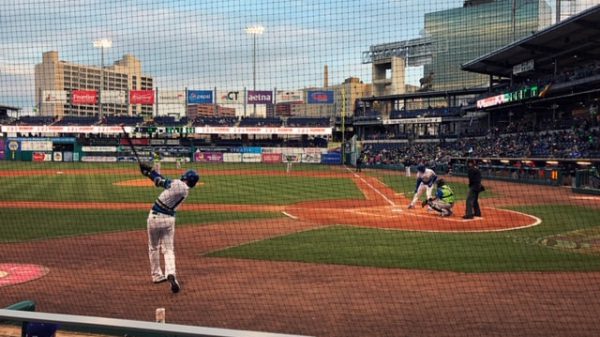 Los Chivos de Hartford return for another season of beisbol

Bill Sarno/CTLatinoNews.com The inspiration for making a rush hour trip into downtown Hartford on a unbelievably muggy Friday night was to witness...