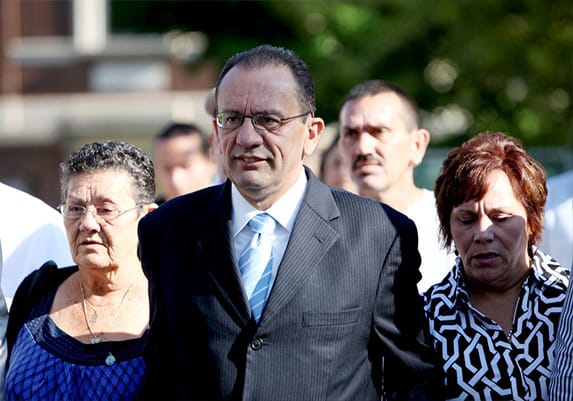 Four months ago, only a fool would have bet that former Hartford Mayor Eddie Perez would ever run for office again.

Perez resigned in 2010 after a jury convicted him of accepting free home improvements from a city contractor and of attempting to extort $100,000 from a developer who wanted to buy a downtown parking lot run by one of Perez’s political allies. Perez then launched an appeals process that dragged on until 2017, when the Connecticut Supreme Court overturned the convictions on grounds that Chief State’s Attorney Kevin Kane and Superior Court Judge Julia Dewey had most unfittingly lumped both cases into one trial, so as to prevent Perez from defending himself in one case without incriminating himself in the other. Some experts suggest that neither case would have been winnable on its merits if Kane and Dewey had not merged them into one. We will never know the answer to that question. Kane’s threat to retry Perez twice, which would likely leave him penniless even if he won, forced Perez to plead guilty to the extortion charge in return for no prison time.

Considering what he’s been through, it’s a wonder that Perez would want to go anywhere near politics again. Yet, many of those who thought they had seen the last of him after the court case, are now laying odds that he would be the clear favorite to win if he runs again. Perez, who had relocated to Southington for much of the appeals process, moved back to Hartford before the end of 2018 and has let it be known that he’s looking into the possibility of running for mayor against incumbent Luke Bronin in 2019.
“I’m just a private citizen talking to folks, answering phone calls and doing my due diligence,” he said, as if no one ever heard of him. “I haven’t made up my mind yet.”

Judging from the adoring applause that Perez receives at the community events he has attended lately, city residents who remember what Hartford was like when he was mayor prefer to believe that he got a raw deal, as the strongly-worded Supreme Court ruling seemed to suggest. Back then, about half the members of the current Hartford City Council and officials at numerous public and private institutions got their professional start as members of the Perez administration. Moreover, Hartford was bursting with dozens neighborhood construction projects, including good number of new schools and home ownership developments, in which much of the labor was provided by Hartford residents and minority contractors. It’s virtually impossible to walk anywhere in the city today without bumping into a building that Perez put up. The Hartford school system, which for decades languished at the bottom of every achievement category, became a national model for progressive education. Test scores improved. Graduation rates rose. Times were good. Everybody got a piece of the pie, so long as Eddie Perez held the knife.

That’s not to say that toppling Bronin is going to be easy for Perez. Access to money with which to fund a political campaign will perhaps be the biggest factor in determining whether Perez decides to run. As of now, Perez has no money and Bronin, an ambitious attorney from Greenwich with ties to wealthy charter school advocates, must already have more money than he needs. Bronin can also count on support from Hartford’s Democratic Party Town Committee, whose endorsement often, but not always, decides the winner of the general election in this overwhelmingly Democratic town. Perez would need enough financial support to carry him through the party convention, a primary election challenge in September and perhaps even the general election. Whether those who benefitted from Perez’s nine years as mayor, including individuals now tied to Bronin, will return the favor remains to be seen.

Political support will also weigh heavily in determining whether Perez runs. In Hartford, political support typically splits along African American, white and Latino racial lines with victory going to whichever two groups join forces against the third. Bronin won in 2015 in part by embracing the African American community and yielding the Latino vote to then-mayor Pedro Segarra. Those conventional alliances don’t parcel out as cleanly this time around. Two African Americans — State Representatives Brandon McGee and public access television host J. Stan McCauley — have declared their intention to run against Bronin. Their very presence reveals an appreciable level of African American discontent with him over the past four years. Latino hopefuls for mayor, if they exist at all, have apparently decided that it would be suicide to declare their candidacies before Perez makes up his mind.

Then there are the issues of performance that have to be considered. Bronin, quite naturally, claims that he saved the city from the brink of bankruptcy. He inherited a $48 million municipal deficit and, with former Gov. Dannel Malloy pulling the strings, used the threat of bankruptcy to persuade the state legislature to pay off the city’s $550 million general obligation debt and to secure numerous labor concessions that shrunk the city’s workforce. With the bankruptcy scare behind him, Bronin says he is now free to focus on growth. He points to a number of development projects in the downtown area as examples of that growth, although McGee questions whether the word growth is code for the gentrification of the North End neighborhoods that border the downtown area.

Finally, there’s the matter of Perez’s guilty plea to attempted extortion. Regardless of whether voters believe he was railroaded, the issue will not go away. The mainstream press will likely hammer Perez with it every day, so as to limit the campaign storyline to that of a convicted felon taking on a member of the enlightened ruling class, as opposed to a vastly popular Latino ex-mayor with a track record of success, taking on a rich, white incumbent who — save for the Democratic Town Committee, where a little money goes a long way — appears to have alienated a noticeable portion of his own political base.

By comparing 2010 U.S. Census data with Hartford’s primary election results, where a contest between Bronin, McGee and, perhaps Perez would likely play out, voters who identified as African American turned out in higher numbers (estimated at 4,114) than any other ethnic group in the past three primary races,. Latino turnout (3,549) followed closely behind. Voters who identify as white, on the other hand, have dwindled to 1,650 over time.
If Eddie Perez can persuade voters that, based on past experience, he can pull Hartford back from the depths of despair once again, the race for mayor is likely to be very close and very exciting. “First, I have to convince myself that I can do it,” he said.