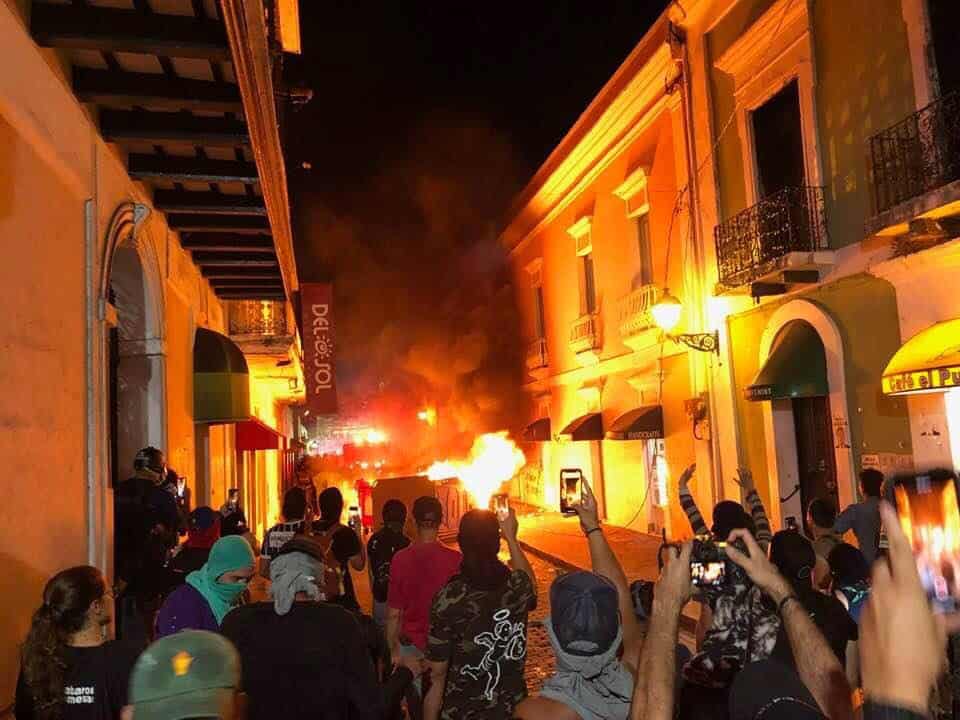 Jason Ortiz had just arrived Monday in Puerto Rico to visit family members, but when thousands of people jammed the Calle de la Forteleza, the narrow street leading to the governor’s mansion in Old San Juan, calling for Gov. Ricardo Rosselló to resign, the Connecticut resident had no second thoughts about joining the protests.

Ortiz, who as a founder and president of the Connecticut Puerto Rican Agenda, has a long resume of political activism and support for his people on the island and mainland, as well as opposition to U.S. policies and the current leadership of the island.

The Norwich native and Serafin Mendez-Mendez, a Central Connecticut State University communications professor, were eyewitnesses to protests in San Juan and Mayaguez this week, and many people of Puerto Rican descent in Connecticut were closely following the videos they shared on social media as well as those provided Monday night by CBS journalist David Begnaud, who is highly respected among Puerto Ricans for his coverage Hurricane Maria’s devastation to the island in 2017.

Mendez-Mendez who arrived in Puerto Rico over the weekend described the situation to Ctlatinonews.com as “total chaos” but added, “The protests are totally justified.”

Media reports about the demonstrations, which started over the weekend and were quelled by tear gas and pepper spray Monday night, focused on the reaction to leaked comments by Rosselló as part of a private chat group. The report on these conversations, loaded with misogynist, racial and homophobic insults, covered nearly 900 pages.

What many people saw as the most inflammatory comments and the final straw was a series of derogatory and misoganistic barbs from the chat group. The targets of these comments included San Juan Mayor Carmen Yulín Cruz, former New York City Council Speaker Melissa Mark-Viverito, and Resident Commissioner Jennifer Gonzalez, the island’s nonvoting member Congress. There also were racial and homophobic slurs against performer Ricky Martin.

For Ortiz and others at the demonstrations the issue was bigger than just the so-called “Chatgate” or “Rickyleaks.” Their call for the governor to resign was driven by an overall disapproval of a commonwealth administration as exemplified by the recent resignation and arrest of two key members of the Rosselló on charges of misuse of public funding.

Ortiz said the protesters heading toward the governor’s mansion, the Fortaleza, were peaceful Monday night until police fired pepper spray on them. At his point, a fire was ignited in the street and what police called a “riot” took place but most of the 5,000 marchers were not involved.

“The use of aggression did little to deter the protestors who simply regrouped and retook the space,” Ortiz wrote on Facebook.

Responding to an inquiry from Ctlatinonews.com, Ortiz said, “The crowd and people of Puerto Rico were united in their demand that the PR government and specifically Ricardo Rosselló be held accountable for the embezzlement of tens of millions of dollars in education funding while simultaneously closing over 200 schools,” Ortiz said. “And we can not forget that over 4,656 people died as a result of Rosselló’s negligence after Hurricane Maria.”

The breadth of the criticism of the Rosselló administration and the disturbing chat messages was visible in a video of a peaceful Mayaquez protest posted Tuesday by Mendez-Mendez. The Facebook video showed one woman carrying a sign “Renuncia Ricky! Corrupto” and another demonstrator holding the gay pride flag.

Begnaud, who left his storm drenched home state of Louisiana Monday morning and was on the scene of protests that afternoon and evening, was one of several journalists derided by the chat group who targeted a report he did on crime on the island as hurting tourism.

Begnaud prepared an inclusive report on the Puerto Rican protests which was televised on CBS This Morning on Tuesday on corruption issues and the chat revelations, noting that more of the latter may be coming.

Former state Rep. Illia Castro of Hartford shared a copy of Begnaud’s report on Facebook Messenger. Her conclusion was that Rosselló should resign.

Part of Begnaud’s report showed the governor attending church and saying that he sought forgiveness. This photo op did not resonate with state Rep. Edwin Vargas of Hartford.

“If the governor of Puerto Rico is truly sorry then he should not hesitate to resign,” the Puerto Rico-born Vargas said. “This would be a real form of atonement. Having some Reverend who may be on his payroll exonerate him in my opinion would be meaningless.”

On Tuesday, the governor in an address to the Puerto Rican people apologized but was staying in office. By then, however, four of the chat group already had resigned or were fired and a fifth had tendered his resignation.