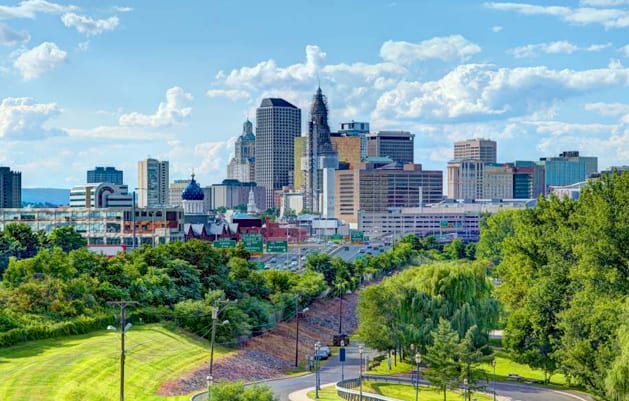 The Fair Housing Act banned racial discrimination 50 years ago. Yet Latinos and African Americans continue to be denied mortgage loans at higher rates, according to an article published by Reveal from The Center for Investigative Reporting.

The practice is known as redlining and has its origins in the 1930s with surveyors from the Home Owners’ Loan Corporation (HOLC) who “drew lines on maps and colored some neighborhoods red, deeming them ‘hazardous’ for bank lending because of the presence of African Americans or European immigrants, especially Jews,” the Reveal article said.

Hartford was not immune to the redlining practice, neighborhoods were color-coded and assigned grades by HOLC, according to a WNPR article.

The worst grade a neighborhood could receive was a D and assigned the color red. As a result, the majority of downtown Hartford was red in the 1930s. Hartford’s North End, Frog Hollow and South End was ranked with a C Grade by the surveyors, just above the least desirable ranking, according to an article by WNPR. Grade C neighborhoods were color coded yellow.

Although outlawed for 50 years, redlining continues and is most common in inner-city neighborhoods. But the pattern of color coding neighborhoods persisted. As the WNPR article found, “A poor ranking created a pattern, later known as redlining, that removed from neighborhoods money that might have made a difference, even today.”

As a young boy, Robert Cotto, Jr., the current Director of the Urban Educational Initiative at Trinity College, grew up in Hartford’s North End. He told WNPR that he remembered his parents always talking about moving to a better neighborhood. Eventually they did move to the suburbs.

“People are looking at places in the North End, or they’re looking at places in Frog Hollow and they’re saying ‘These are tenements, these are ‘underperforming’ schools, or whatever negativity they want to say about the schools or the housing, but they’re not realizing this was organized that way,” Cotto told WNPR. “It’s not just the people who live there decided to create bad schools or build crumbling houses, or to ignore it. This was organized in a way that investment would not flow to those areas as they did to other areas.”

According to Connecticuthistory.org, the present day patterns of racial isolation in the Hartford metropolitan area come from a mix of historic and present-day policies. A number of past policies, promoted by both private and federal interests, encouraged racial segregation, the site said.

“Although these explicitly racist policies are no longer legal, research shows that their legacy often persists well beyond their termination. For example, historical data reveals long-term patterns of inequality that can be traced back to racist zoning codes of the past. Of the housing barriers that ethnic minorities within the U.S. have faced in the 20th century, ‘redlining’ is perhaps the most talked about,” the organization said. “By effectively directing capital investment away from ‘redlined’ neighborhoods, this practice shaped the demographic patterns as well as the built environments of cities and suburbs across the U.S.”

Jeff Gentes, managing attorney for Connecticut’s Fair Housing Center’s Fair Lending and Foreclosure Prevention Project, told WNPR, “For people who think that we’re trying to re-litigate the past or trying to use things of the past to explain issues now, the point is that stuff has a real impact on people’s lives.”

For a historical look at grades assigned HOLC for East Hartford and New Britain, click here.